60 years for transport - it's STUVA's birthday

The Research Association for Tunnels and Traffic Facilities (STUVA) is like so many birthday children in these pandemic times. Unfortunately, the party is cancelled due to a contact ban and lockdown. There would be so much to celebrate, after all, since its foundation on 15 June 1960, the non-profit STUVA has undergone a remarkable development in every respect.

It all began on January 5, 1959, the day on which Tengelmann Group founder Karl Schmitz-Scholl presented his vision of an underground rail tunnel system which would run through the entire Ruhr region and parts of the Rhineland at the Rotary Club in Mühlheim an der Ruhr. This was to prevent the threat of traffic gridlock in the cities. And at the same time the know-how of the miners of the declining coal mines could be used to create this novel infrastructure. Against the background of the smoldering Cold War, it was also planned to combine the new underground structures with civil protection against nuclear threats. A truly gigantic project. But Schmitz-Scholl was not only a visionary but also a businessman and realist, and so he already suggested during his lecture that a "research society" be founded to realize this daredevil plan. And to give his idea the necessary initial momentum, Schmitz-Scholl provided the initiative financing from his own funds. This was the birth of the STUVA, which was sealed with the founding meeting on 15.06.1960.

Part of the initial financing went into an ideas competition launched by the STUVA in the year of its founding for the construction of an underground central crossing station and an external bus stop. As hoped, the competition met with great public interest and brought underground construction closer to the population. At the same time, the STUVA suddenly became known throughout Germany and beyond.

The subsequent rise of the STUVA to an internationally recognised institution in the transport sector is mainly due to the first (and at that time quasi only) employee in 1960. The then 25-year-old newly graduated engineer and today's honorary member of the board Prof. Dr.-Ing. Dr.-Ing. E. h. Günter Girnau did everything in his power to prevent the "car-friendly city only". To achieve this, he first had to convince the German Association of Cities and Towns of the importance of problem-oriented traffic planning, acquire funds for appropriate research projects and recruit new capable employees.

To exchange ideas with other transport researchers and, last but not least, to increase its own level of recognition, STUVA has successfully organized annual meetings since its foundation. As early as 1963, around 150 experts took part in such a meeting. The "STUVA Conference", which has been held every two years since 1969, has gradually developed into the most important event of its kind worldwide. At the last conference in Frankfurt in 2019, more than 3,800 experts were on site. There are regularly three days during which everything revolves around tunnel construction and tunnel operation. More than 60 technical presentations translated simultaneously into English in two parallel sessions, around 200 exhibiting companies from the industry who present their services and latest products at the STUVA-Expo, which takes place at the same time, and a gathered international audience of experts from tunnelling and tunnel operation that is second to none.

Recognized as a non-profit association for six decades, STUVA can look back on a remarkably positive development. As a neutral partner, it brings together all important authorities for tunnel construction, tunnel operation and other traffic facilities: It currently has around 260 corporate members, including many cities, universities, associations, transport companies, engineering offices, construction companies and suppliers that build and operate underground railways.

STUVA researches, tests and advises in all areas of inner-city traffic and underground construction. With its three departments "Transport & Environment", "Tunnelling & Construction" and "Fire Safety & Security", STUVA is broadly based. One of the numerous recent research projects is the interdisciplinary research project "InREAKT - integrated help-reaction chains to increase the safety of public transport", which is led by STUVA. The core idea of InREAKT is to ensure improved emergency management in public transport and an increased sense of security for passengers by establishing integrated help-response chains. For the IT-supported system developed for this purpose in the InREAKT project, the researchers were even awarded the German Mobility Prize of the Federal Ministry of Transport and Digital Infrastructure (BMVI) and the initiative "Germany - Land of Ideas" in 2017.

As STUVA became more and more popular, the number of inquiries from the private sector became more and more frequent. In 1996 STUVA decided to establish STUVAtec GmbH as a 100% subsidiary for the processing of orders without non-profit background. This subsidiary has since then developed magnificently: Since its foundation, STUVAtec GmbH has provided fire protection engineering services for most of the new underground railway constructions in Germany and numerous projects abroad. It belongs to the exclusive pool of experts who are certified by TÜV Nord for Deutsche Bahn AG (DB AG) as creators of fire protection concepts. It carries out clearance calculations as well as smoke calculations.

In addition, STUVAtec also works on numerous research projects. For example, it was mainly responsible for the research projects "Emergency scenarios for tunnel systems of rail-bound public transport and their management" and "Risk analysis of fire events in rail-bound public transport tunnel systems", which were carried out on behalf of the Federal Ministry of Transport. STUVAtec co-developed the "DB design fires for suburban railways and mixed passenger train traffic" for Deutsche Bahn.

Since 2017 STUVAtec no longer only provides expert and specialist planning services for underground fire protection, but is also the right contact for preventive fire protection in building construction.

From the "one-man operation" in 1960, STUVA and STUVAtec have developed into a highly specialised knowledge group. The 20 or so permanent employees now have three of their own test halls with more than 2,000 square meters of floor space and partly unique large-scale test facilities at their disposal for research purposes, in order to work together with research partners and clients towards the goal of a liveable and accessible transport infrastructure for all. STUVA, for example, has a so-called circular runway facility in which road surfaces and fixtures can be tested at temperatures between -30 °C and +60 °C. With an axle load of up to 10 tonnes and a maximum speed of 100 km/h, almost any traffic load can be simulated here.

In order to pursue your statutory goals, STUVA is today well networked both nationally and internationally. Already in the 1970s, the newly founded German Tunnelling Committee (DAUB) elected Günter Girnau as its first managing director. Since then, the DAUB office has been located in the STUVA premises. STUVA was also instrumental in the founding of the worldwide umbrella organisation of tunnel builders ITA (International Tunneling and Underground Space Association) and has twice provided the president in the history of this world association (Prof. Günter Girnau from 1980 to 1983 and Prof. Alfred Haack from 1998 to 2001).

One of STUVA's goals since its foundation has been to disseminate its knowledge as completely as possible. To this end, it has been using the international journal for underground construction "tunnel" as the official organ of STUVA since 1995. In addition, STUVA publishes important results from a wide range of research areas in its own book series "Forschung + Praxis". As issue 54 in this series, for example, the "Recommendation for gasket frames in segmental tunnel linings" was published last year. This work, adapted to the latest technical developments, combines the STUVA recommendations "Testing and use of sealing profiles in segmental linings" and "Use of gasket frames in segment tunnel linings", which were published in 2005 and 2006, and is an indispensable working basis for all building owners, manufacturers, planners and testing institutes. With its highly specialised expertise, STUVA has also been involved in numerous DIN standardisation committees over the years and, due to its neutrality, is regularly called in as a mediator in disputes.

But what do the successes of the past and present mean when one does not think about the future? This is why STUVA has been increasingly promoting young talent for several years now. With STUVA-YEP (STUVA Forum for Young Engineering Professionals), the STUVA has created a lively network for young engineers, which has already grown to over 300 members since its foundation in 2017. Regular events, such as workshops and site visits, offer the members of STUVA-YEP a platform for networking and the exchange of experience on a professional as well as personal level.

Together with the next generation, STUVA wants to continue to shape international tunnel construction and traffic infrastructure together in the coming decades. The fight against climate change alone makes sustainable transport a necessity. Our common future needs an intelligent and resource-saving transport infrastructure. This is why STUVA is working consistently to harmonise the diverse requirements for transport services, comfort, safety, accessibility, environmental compatibility and economic efficiency.

STUVA, in any case, has its sights firmly set on the future - and will continue to use its accumulated knowledge and strength for transport oriented towards the common good. Nothing else can be expected of it, because this is exactly what it has been doing for 60 years now.

Figure 1: Ready in time for its 60th birthday: The new building in Cologne is the tailor-made home for STUVA's upcoming tasks (right in the picture the new building, left the renovated and now rented old building) 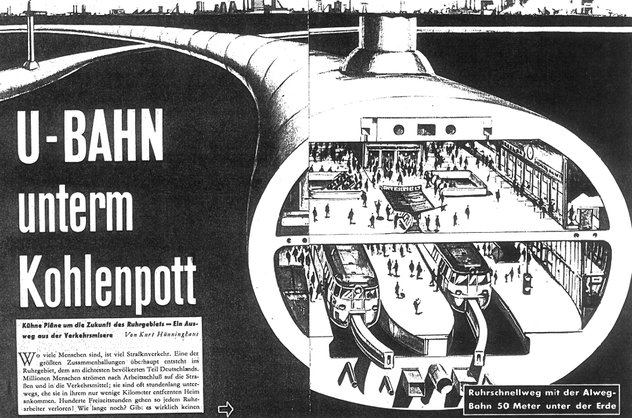 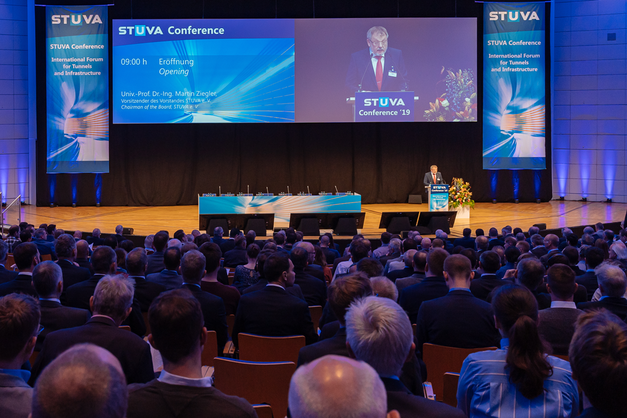 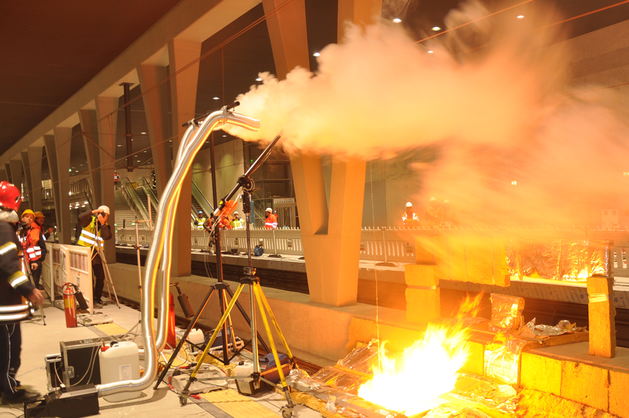 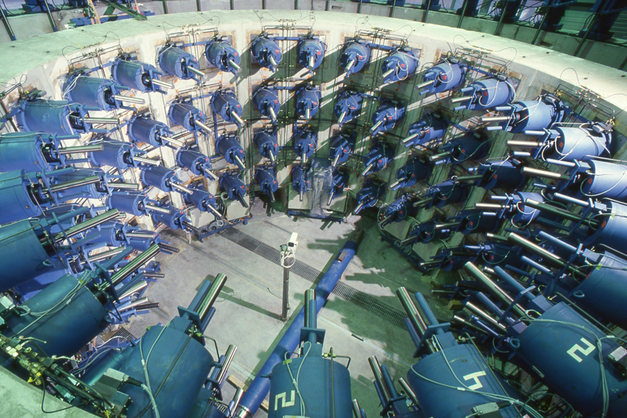 Figure 5: The STUVA test halls are also available for very large tasks: Here is a section of the 4th tube of the Elbe tunnel in a 1:1 deformation test (96 hollow piston presses with 2 MN tractive force each) 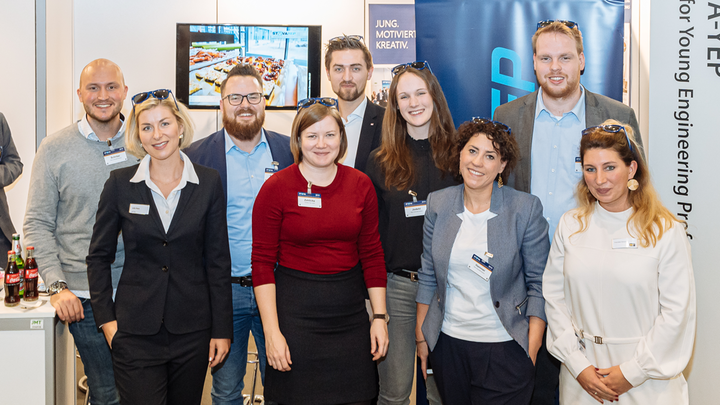