More than 1,000 rescue and emergency forces, 300 actors and more than 200 referees, observers and guests: The emergency exercise in the Fleckberg Tunnel, which took place on June 22, 2019, is the largest of its kind in Germany to date and probably the most realistic. Excercise assumption: An ICE train manned by 300 people came to a standstill in the middle of the tunnel after an emergency braking maneuver. An incipient fire of the transformers makes it impossible to continue the journey and develops into a full fire. There is smoke everywhere and the cries for help of the injured echo through the tunnel. There are deaths and injuries - physical hard work and maximum psychological strain for all rescue forces!

STUVA was involved in the preparation and execution of the exercise. It is currently working with other partners on the SIKET research project (evaluation and further development of safety concepts for railway tunnels) under the direction of the German Centre for Rail Transport Research at the Federal Railway Authority (DZSF at EBA). This project is funded by the Federal Ministry of Education and Research (BMBF) as part of the "Research for Civil Safety" programme. Within SIKET, STUVA is responsible for the modelling of smoke propagation and the further development of a holistic safety and rescue concept. During the exercise in the Fleckbergtunnel STUVA took over the artificial smoke application and is involved in the evaluation of the extensive results.

In order to make the exercise as realistic as possible, the German Red Cross (DRK) in Thuringia, together with scientists from the SIKET research project, assigned individual injury patterns for approx. 60 "seriously and severely injured". As in real life, their vital signs improved after medical treatment, but could deteriorate without treatment. Employees of the Centre for Security and Society at the Department of Sociology of the Albert-Ludwigs-University Freiburg had created a personal identity and travel history for each "traveller" (start and end point of the journey, reason, etc.). In addition, social groups were formed in advance (families, associations, friends, etc.) who stay together in the event of an emergency, lose each other, seek each other but also mutually support each other. All events were planned as realistically as possible. The Thuringian state police had even created corresponding identity cards for the individual participants according to the previously determined legend. The exercise did not only cover the tunnel and the three rescue stations at the tunnel portals and at the emergency exit. Since the rescue chain was to be completely simulated, nine hospitals also took part in the exercise. They took the opportunity to practice the procedures in their areas (emergency room, diagnostics, OP areas and intensive care units) in the event of a mass casualty attack. An ADAC rescue helicopter took patients by air to the assigned hospitals. The state and federal police were also deployed with several helicopters and more than 100 task forces.

With detailed personal legends and injury patterns for each traveller, the SIKET employees had already succeeded in creating the most realistic possible effect on the rescue forces during the preparation for the exercises. During the exercise, the researchers used powerful fog machines to partially smoke the tunnel tube, which further increased the realism of the situation for the rescuers. Of course the simultaneous exercise assumptions "fire", "emergency braking", "stop in the tunnel" as well as the extent of injuries in this combination are anything but typical and create an actually undesirable exercise artificiality. In the next step, the numerous recorded data (videos, photos, observation sheets and interviews with various participants) will be evaluated by SIKET and used for further work in the research project. The aim is to use the data obtained to extend the currently available tools for rescue from railway tunnels. For the future, it is planned to use the collected insights to create a practice environment in Virtual Reality (VR) that allows firefighters to practice such special situations realistically even without complex tunnel closures. After all, the core objective of SIKET is to prepare rescue workers and railway personnel for damage situations or even better, to prevent such accidents altogether. Further information on SIKET can be found at www.sifo.de.

The 1,490 m long Fleckberg tunnel in the Thuringian Forest is part of the 107 km long new line from Ebensfeld to Erfurt on the European high-speed line from Italy to Scandinavia. In this challenging topographical location, 109 engineering structures - 22 of which are tunnels - are seamlessly lined up over a length of approx. 30 km. The VDE 8.1 section is the largest and most complex individual project of the German Unity No. 8 transport project and therefore places very special demands on the deployment concept for the rescue forces from Thuringia and Bavaria. The aim was therefore to develop a uniform deployment concept for all 22 tunnels at an early stage, across the different federal states. The probability that a burning train will actually remain in a tunnel is, by the way, extremely low. DB AG has taken numerous measures in its vehicles to prevent the formation of a fire. If, however, a fire does break out, the requirement is that the train in question must not come to a standstill inside the tunnel. For this reason, all trains are equipped, for example, with an emergency brake override to enable them to continue their ride out of the tunnel into the open air, where the conditions for evacuation and fire-fighting work are much better. .

Since 2011, the coordination management of "danger prevention on the VDE 8.1" has been working on the development and refinement of a rescue concept. This coordination management consists of all hazard prevention and prevention units of the affected districts in Thuringia and Bavaria and the city of Erfurt. In addition, there are the Thuringian State Fire Brigade and Disaster Control School as well as representatives of DB Netz AG, the State and Federal Police, psychosocial emergency care, THW and other aid organisations.
The operational concept is based primarily on so-called tunnel base units (TBE). The term TBE is used to refer to a closely knit group of several fire-fighting vehicles and their crew. For the VDE 8.1 section, a total of 18 TBE were set up in Thuringia by the districts and the city of Erfurt and 9 TBE in Bavaria. For each fire event, the operational tactical procedure is divided into three phases: "Explore", "Extinguish" and "Search and Rescue". The respective individual orders are assigned to specific fire-fighting vehicles of the predefined TBE.

Whoever is first on site also acts as first

A special feature of the rescue concept for VDE 8.1 is that each crew of a total of 54 emergency vehicles is trained and materially equipped in such a way that they can fulfil each of the three emergency tasks. This means that all units can be used universally. All TBE are planned for several tunnel structures, but arrive at different times depending on the location due to the different distances. For example, the crew of a fire-fighting vehicle will provide the exploration team for a nearby tunnel and part of the search and rescue team for a distant tunnel.
This exercise is not the first on this route. A total of 11 exercises were already carried out on the new VDE 8.1 line before it was commissioned in 2017, six of which were full exercises. On this basis, the entire procedures were further adapted, refined and checked with the latest full exercise. The first conclusion drawn by those responsible after the major exercise is thoroughly positive: the deployment concept has proved successful in its entirety. 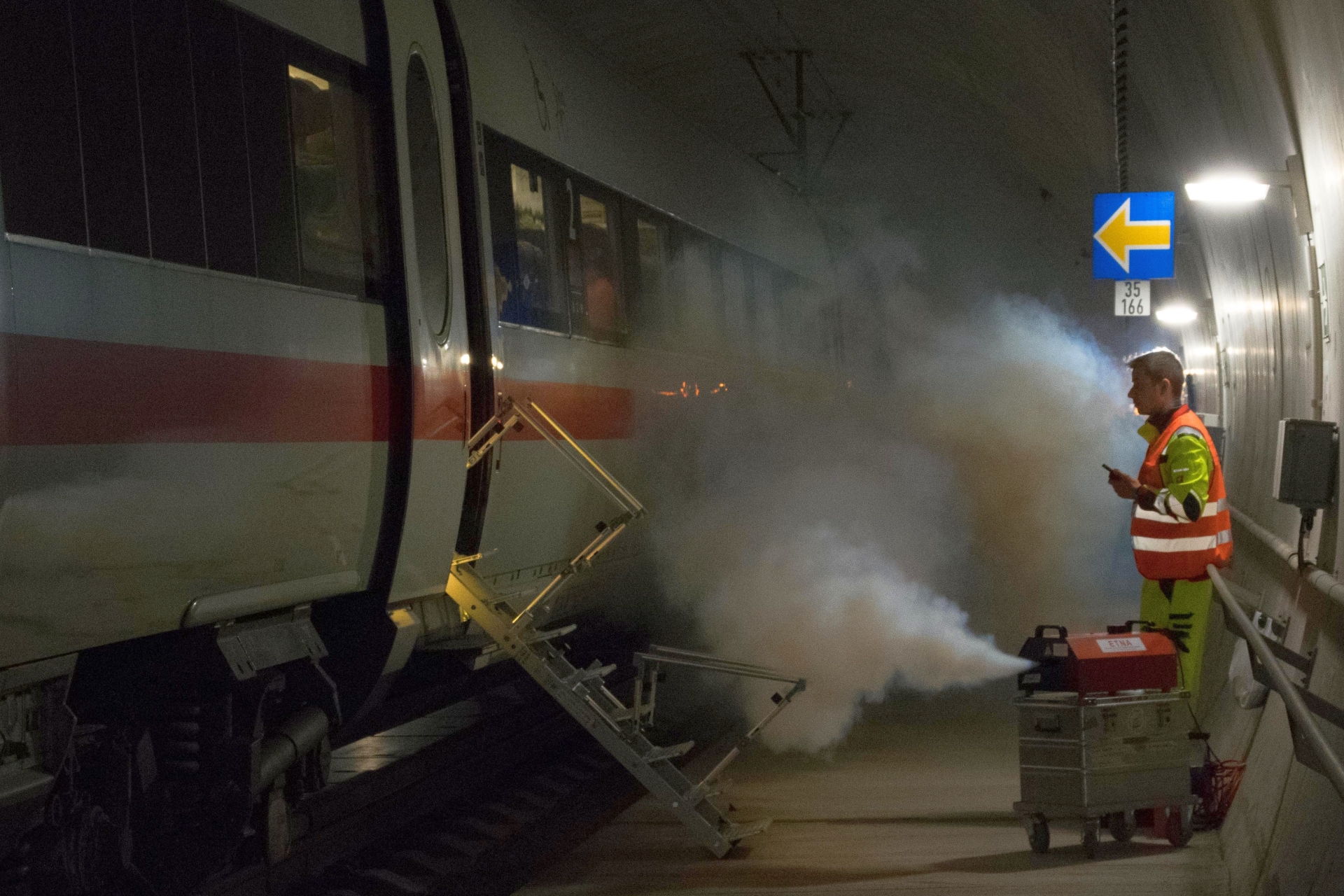 Let there be smoke: SIKET employees with fog machine 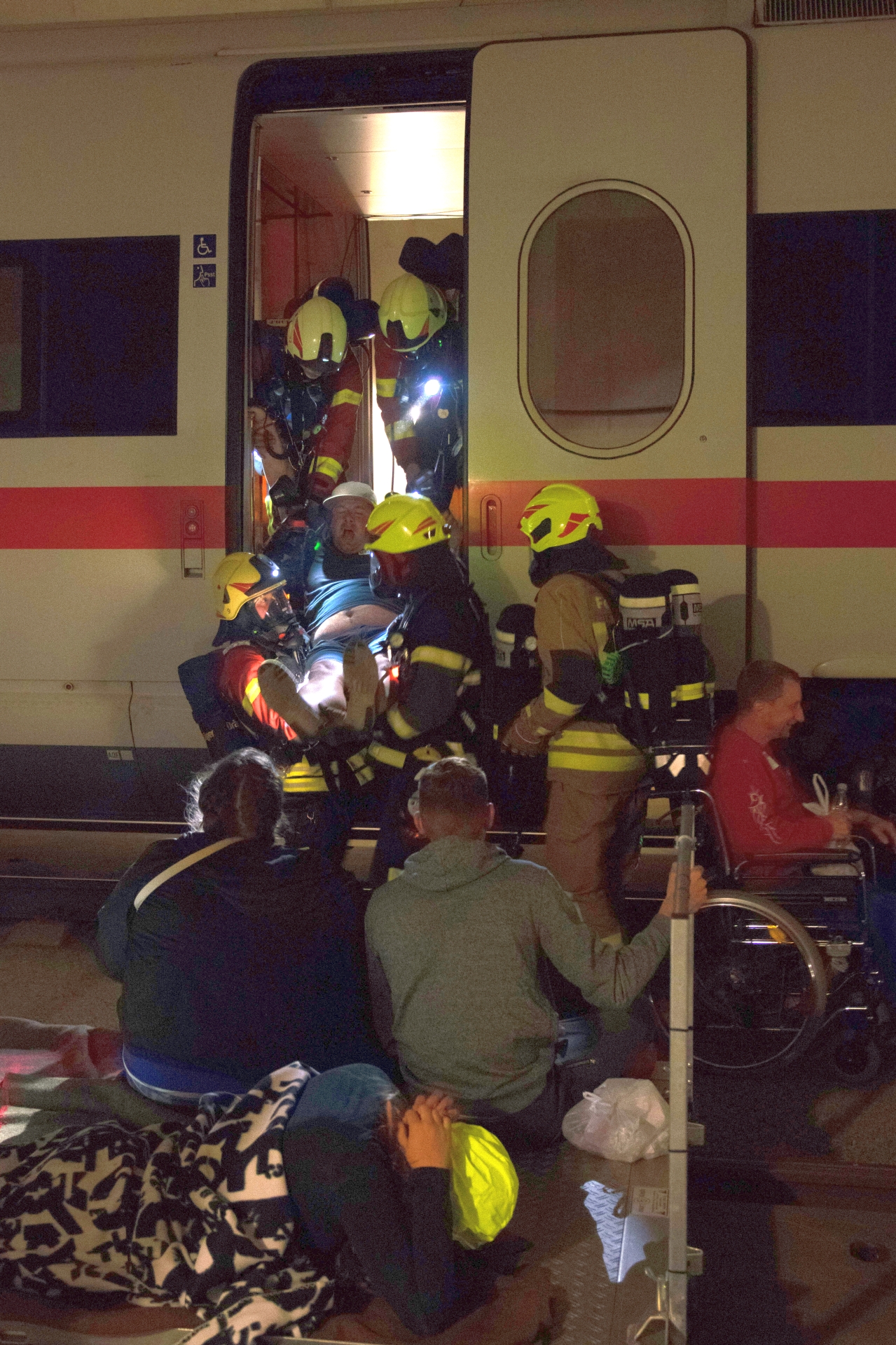 Maximum stress for the rescue services: evacuation of seriously injured persons from a burning train 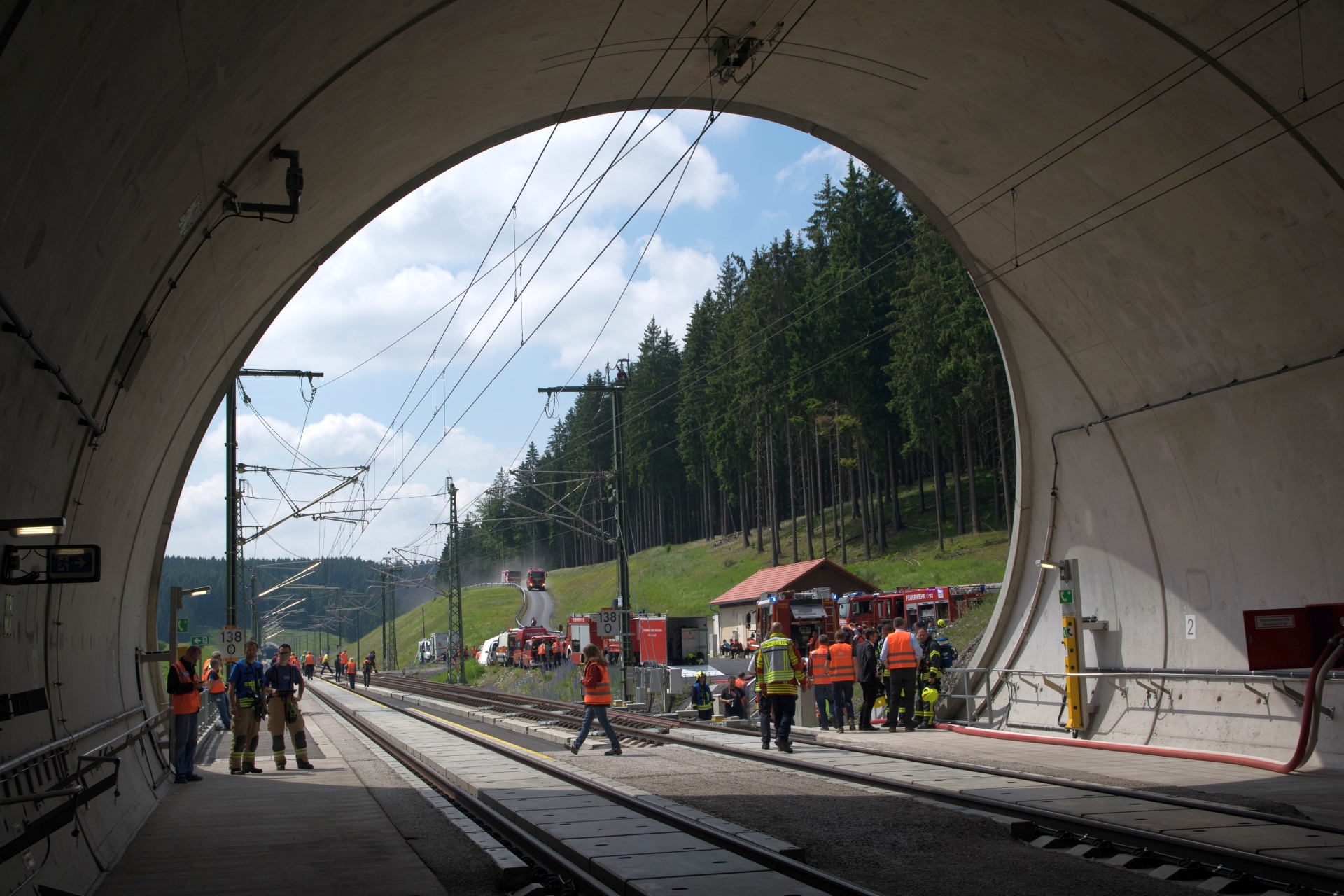 While the emergency forces penetrate into the tunnel, three fully equipped rescue stations are created in a very short time at both portals and at the emergency exit to accommodate injured persons. 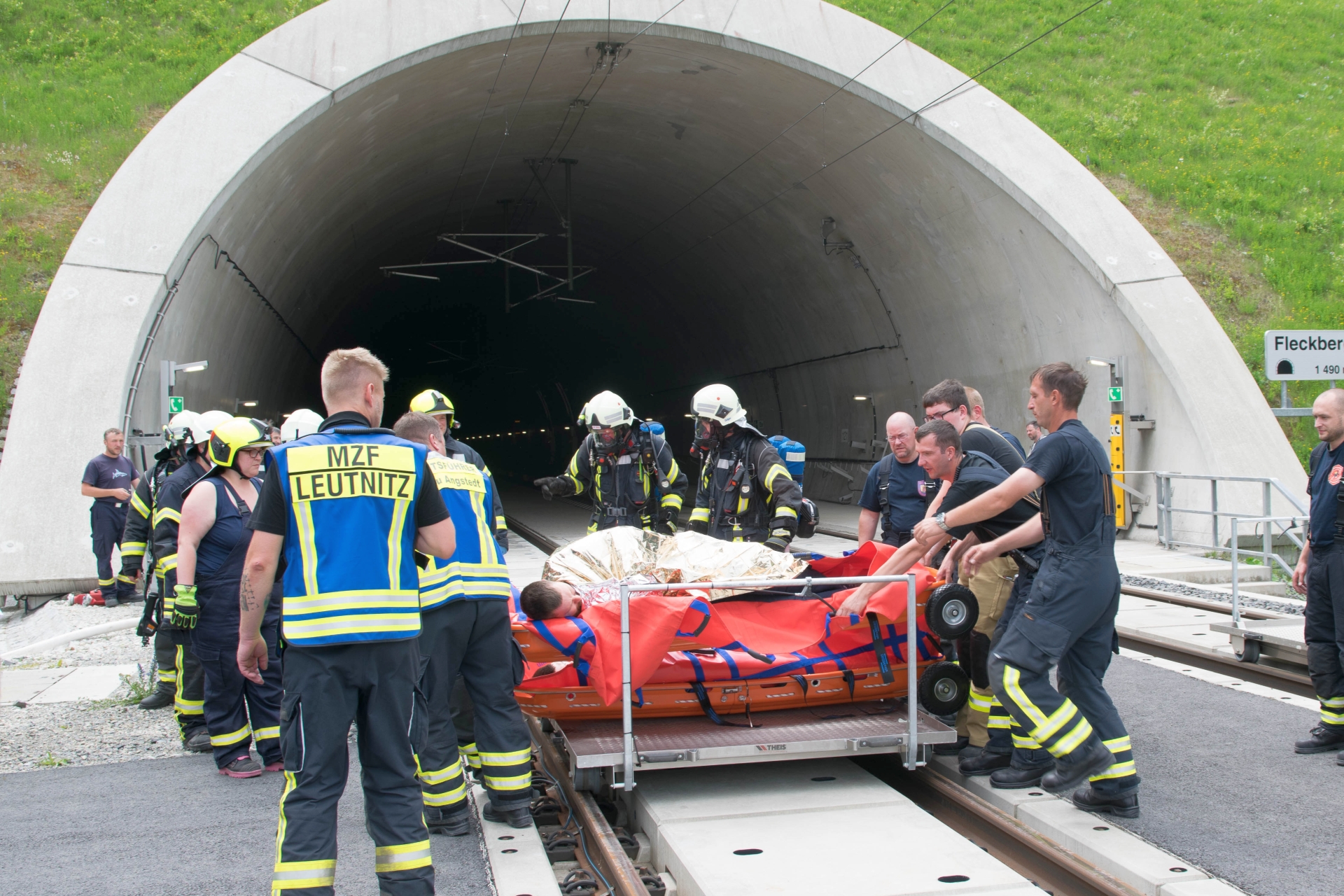 Fast, efficient and gentle for the victim: transport of severely injured persons on a roller pallet 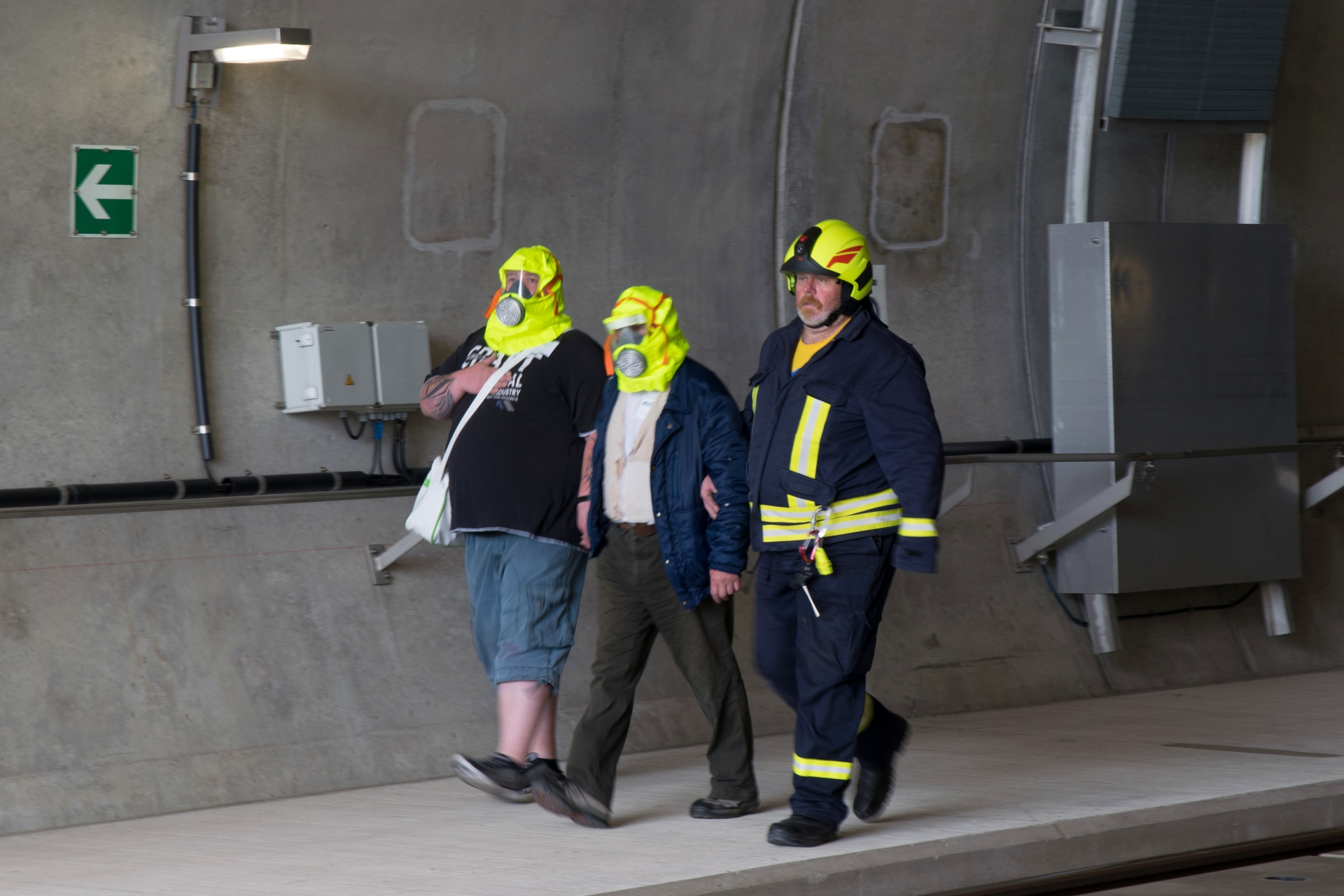 Visibly exhausted: Two slightly injured persons with an escape hood are led by the fire brigade to the rescue area at the portal. 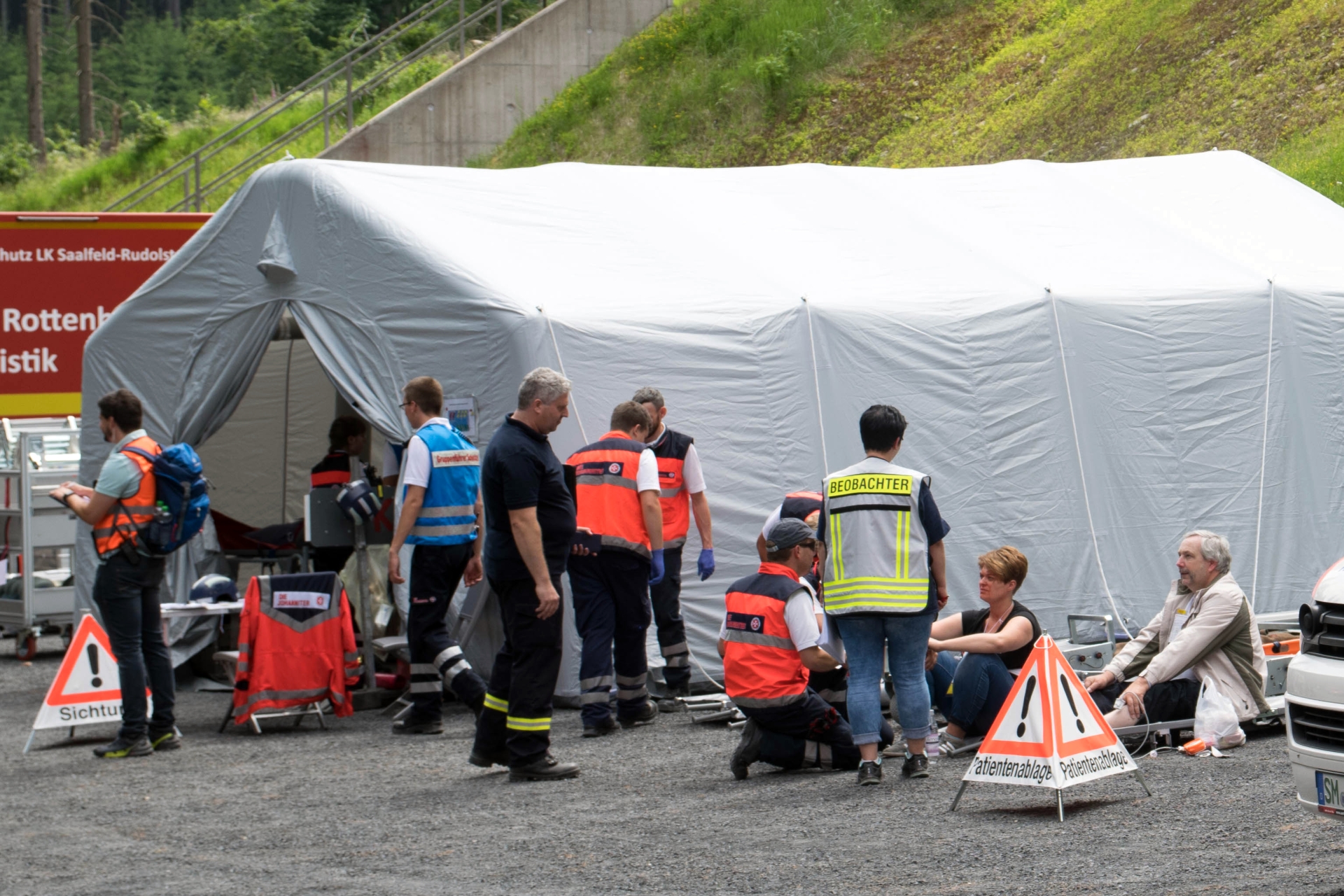 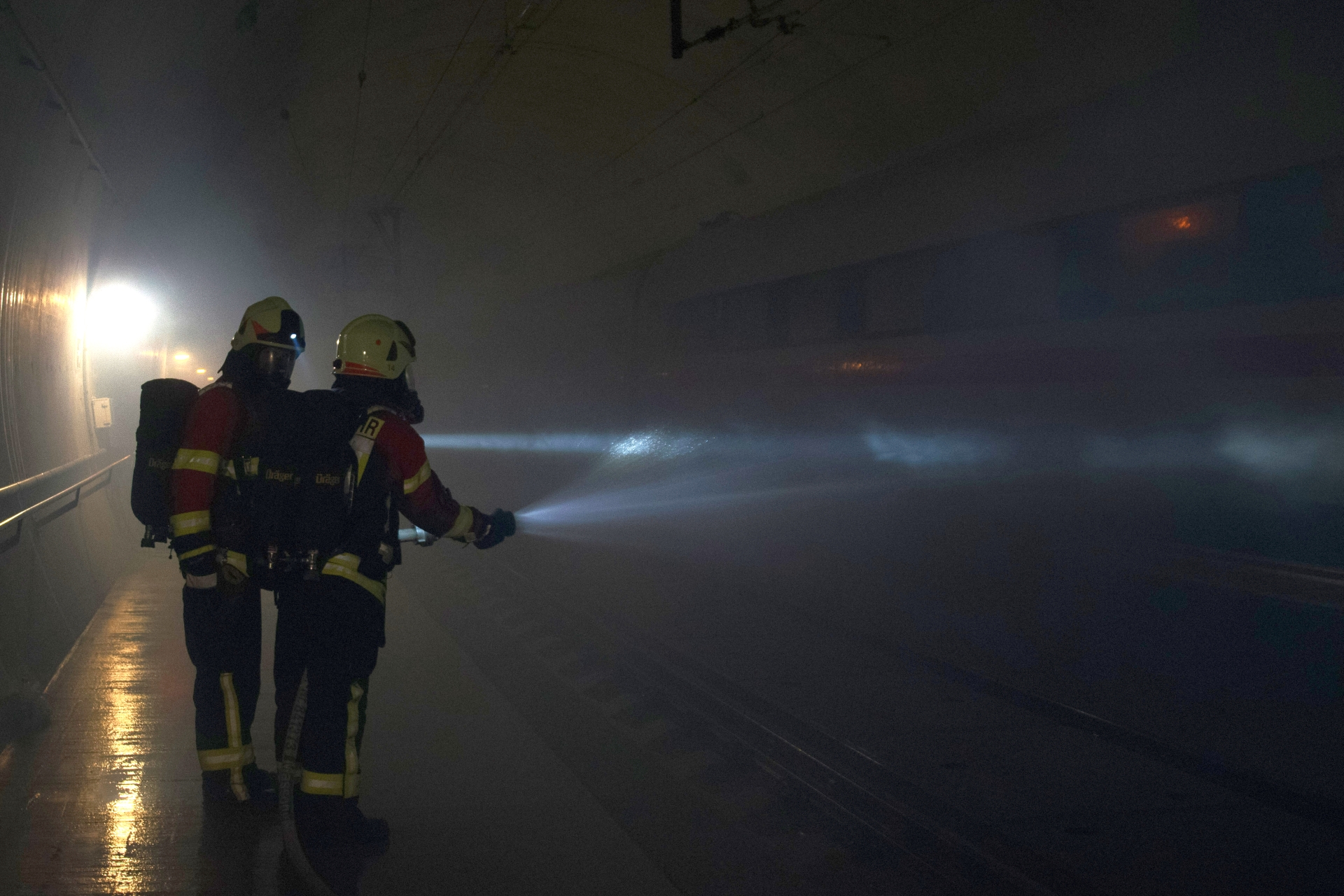 Dense smoke and poor visibility: extinguishing the burning train in the tunnel