Research and development work of STUVA

A correctly executed annular gap compression in the tubbing tunnel is a basic prerequisite for a high quality tunnel construction. But it also provides a decisive contribution to a high propulsive power in mechanical propulsion. In order to further optimize the annular gap compression, the STUVA in Cologne has developed a complex and ingenious system for tests with annular gap mortars. The renowned study company for tunnels and traffic systems thus once again underscores its importance in the area of research and development in the field of construction methods for underground traffic systems.

Annular gap mortar fills the annulus between segmental lining and surrounding rock, which is created by the necessary overcut for the tunnel boring machine. It usually consists of surcharge grit, cement, water and possible additives. The right mixture is based on empirical values and is usually experimentally improved on the construction site by trial-and-error.
In recent years, the development of annular gap mortars - in particular through special products such as multi-component mortar - has become increasingly complex. Because now many substitutes and additives are used, which were previously reserved for high-quality construction concretes:

Wide range of test parameters
With the help of the new STUVA test stand for annular gap grouting (fig. 1) not only conventional annular gap mortars can be examined, but also the influence of the individual components can be systematically analyzed for innovative developments. Thus, targeted optimization is possible, which would be too extensive or too time-consuming in the context of construction site tests. In the plant, for example, all mortar components can be matched to each other in terms of volume and pressure and metrologically monitored (fig. 2). At present, the STUVA test system is designed for four components: the mortar or cement paste component can be mixed with up to two additive streams as well as pressure and volume metered compressed air. The test stand has a modular design so that components can be easily exchanged for one another. These include, for example, the injection pumps, the cross sections of the delivery line or the additive addition devices. Also, the cross-section and the length of the pilasters, through which the mortar is pressed during the propulsion into the annulus, are easy to vary. These pilasters flow into a pressure vessel in the pilot plant in order to be able to actively influence the back pressure in the real annulus by an artificial pressure in the boiler. In addition, filter elements can be incorporated into the boiler to model the rock permeability and to investigate the effects of mortar properties on drainage behavior with the aim of early strength development. Another special feature is the possibility of producing test specimens: these can be removed not only under atmospheric pressure conditions but also under counter pressures of up to 10 bar.

Application example: Water-permeable annular gap mortar
Currently, with the financial support of the Federal Ministry for Economic Affairs and Energy (BMWi), a water-permeable annular gap mortar is being developed on the new plant. The use of such a special mortar is always useful in tunneling in hard rock when high connate water pressures occur and thus a pressure-tight design of the tunnel shell would lead to very thick tunnel shells because of the high loads from water pressure.
The connate water is then passed through the water-permeable mortar (fig. 3) on the outside of the supporting and watertight tubbing shell and at the base of the shell - similar to the so-called umbrella seal in the shotcrete construction. In the development of such a mortar must be noted that this must still be well pumpable despite high water permeability - two requirements, however, in direct competition with each other. The results achieved so far are very promising. 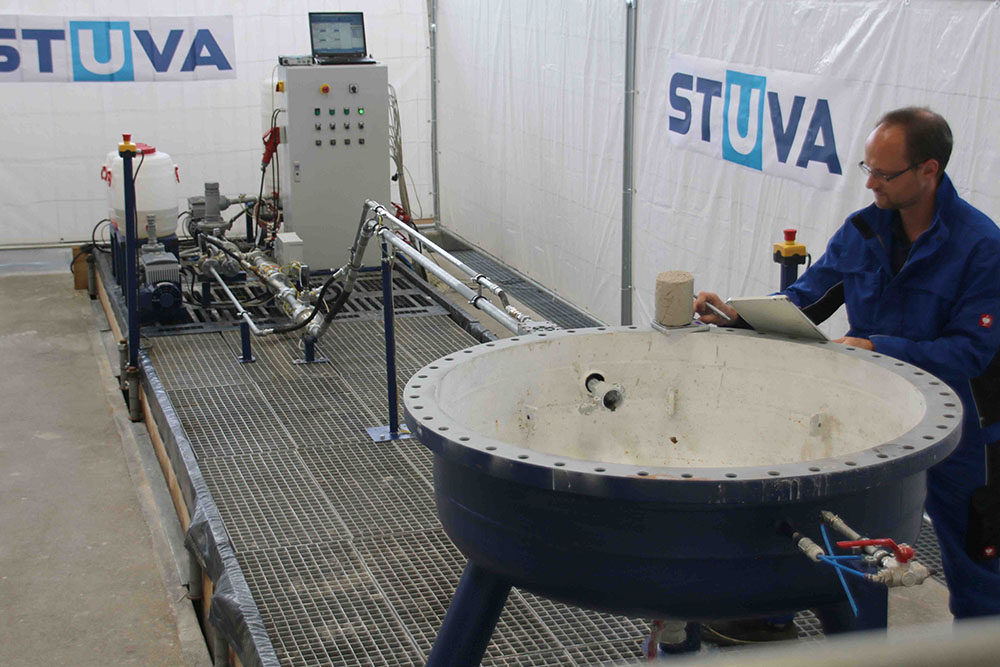 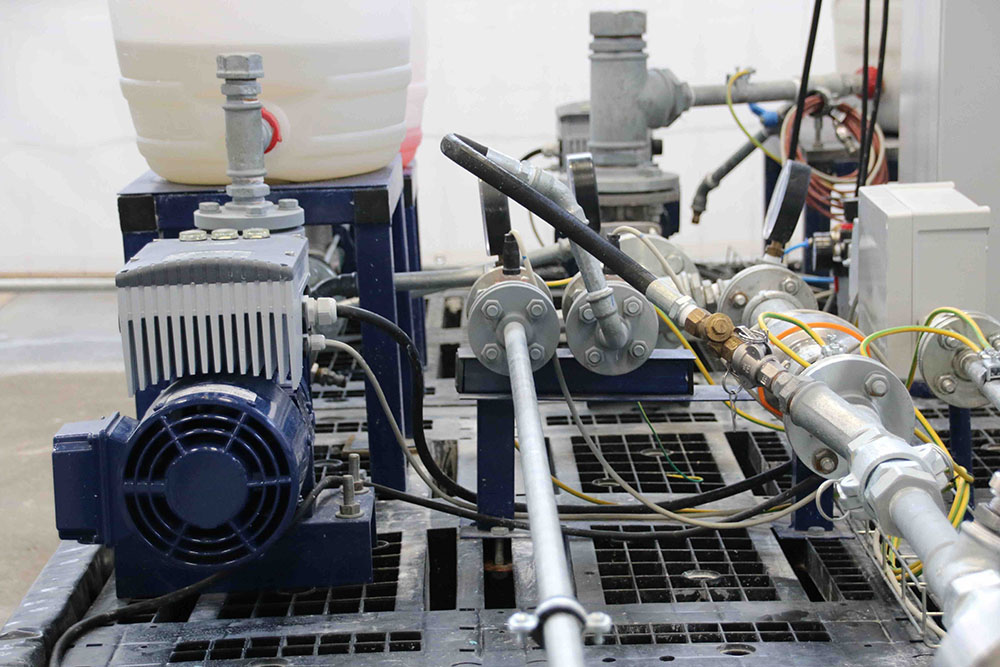