LinkedIn
Start / About us / News / Empfehlungen zu Feuerwehraufzügen in unterirdischen...
21.12.2018

The 51st volume of the STUVA book series "Research + Practice" was published in November 2018 and contains the "Recommendations for firefighting lifts in underground stations". This volume is in german and english language now available for free download here.

The planners of new underground stations to be built are given concrete criteria to make a safe decision for or against a fire brigade lift.

Although numerous investigations and calculation procedures exist for the self-rescue of people from underground traffic facilities in the event of a fire, hardly any reliable data is available for external rescue by the fire brigade. In this case, an external rescue may be necessary, especially for persons with limited mobility, but also in principle for all people who are in an underground stop during a fire event. A fire brigade lift is then a great technical help for the emergency services, with which people in need of help can be rescued quickly and safely even from great depths. However, such an elevator, which is especially protected against fire effects, is not only expensive to purchase and maintain, but so far there have not even been concrete criteria on how to estimate the necessity of a firefighting elevator for a planned station.

In August 2016, the Munich Fire Department decided to carry out an extensive series of tests with its own firefighters under conditions that were as realistic as possible in order to determine the structural characteristics of a station that required a firefighter lift. The core question of the tests was: Under what conditions is a fire brigade team physically still able to bring a helpless person from a low-lying station safely back to the surface if no fire brigade lift is available?

The test series comprised 10 test arrangements with wheelchair users and one test arrangement with a hearing and visually impaired person. From three stations of different depths, a five-man intervention team of the Munich fire brigade had to rescue people. The emergency forces proceeded with the usual breathing apparatus and, in addition to the personal protective equipment, also carried the aids provided in the deployment concept: 2 hose carrying baskets with 3 C hoses each, hand lamps, radios, 1 jet pipe, 1 guide line and a thermal imaging camera.

The experiments were accompanied by observers with several years of experience as train drivers or in the higher operational command service and who are familiar with the special features of underground traffic facilities. In addition to measuring the times for each rescue mission, the firefighters were also able to check their breathing air consumption and pulse rate. In addition, a questionnaire was presented to the emergency services after the test, in which, among other things, they were able to provide various information on the perceived stress caused by the physical exertion of the operation that had just been carried out.

All data and observations were then evaluated by the "Firefighters Lifts Working Group" set up especially for this purpose. The results showed that the necessity of a firefighters lift depends mainly on the absolute depth of the location, but that long walking distances on distribution levels and the absence or presence of smoke curtains or stair enclosures on the platform level also play an important role. In addition, numerous other important findings were made, such as that the consumption of breathing air when carrying a person is much higher than previously assumed and that the usual 100 m long guide lines, which are attached for securing the way back, are simply too short for the long distances in an underground station.

The now published "Recommendations for firefighter lifts in underground stations" therefore make a clear statement: From a depth of 22 m a firefighter lift has to be planned in any case for new stations. Depending on the design of distribution levels and stairwell enclosures, such an elevator may also be necessary at considerably lower depths. 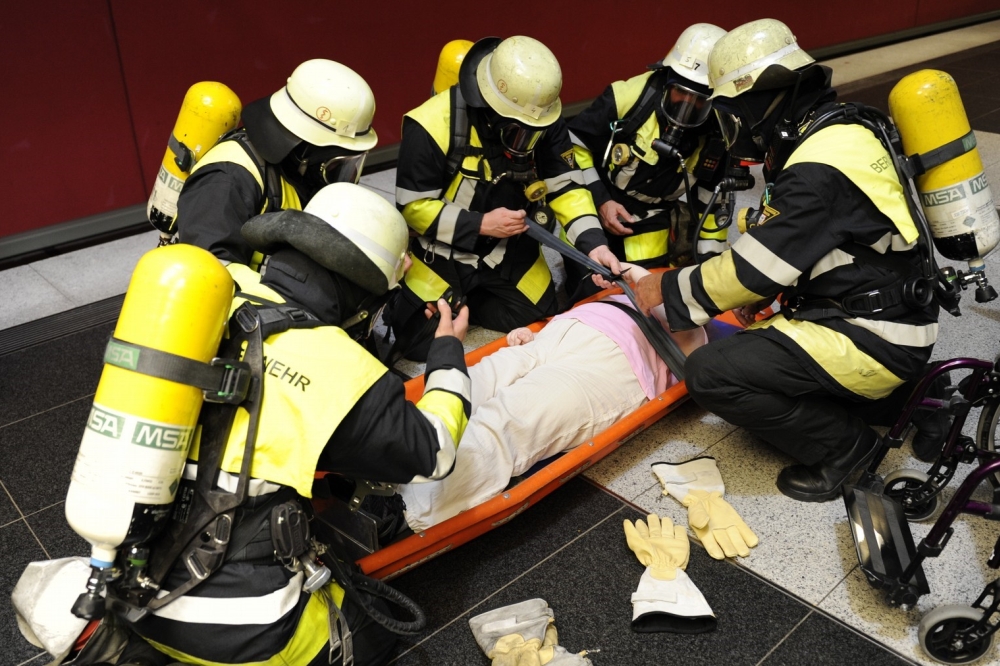