In the middle of the night, a train with 80 people on board remains in the underground tunnel under Lyon - smoke develops. The task is to get the passengers outside quickly and safely. The long-planned major exercise in the French metropolis took place as part of the German-French research project U-THREAT, which is coordinated by STUVA. Together with the local Lyon transport company and the fire brigade, the researchers not only gathered important insights into the behaviour of passengers, personnel and helpers in such extreme situations. They also reviewed new tools such as a special app to improve self-rescue.

The large-scale exercise took place during the nightly shutdown from 08 to 09 October 2019 in the Lyon metro. In the training scenario, a train stops between the two stops "Place Jean Jaurès" and "Debourg" in the middle of the 700 m long tunnel. There are 80 passengers on board who are supposed to save themselves safely and quickly from this threatening situation despite the development of smoke. Two injured persons have to be rescued by the fire brigade. The French transport company and research partner KEOLIS Lyon had worked out the detailed preparation of the exercise in advance.

The main objective of the exercise was to gain new insights into the interplay between self-rescue and rescue by others. A particular focus was on communication between the actors involved: passengers, drivers, dispatchers in the control centre and rescue services. In particular, the approaches developed previously in the research project to increase so-called user-related resilience, i.e. measures for self-help in crisis situations, were tested. These include, for example, technical support systems in the form of smartphone apps that are also suitable for passengers with reduced mobility. The opportunity to test and evaluate such solutions in a real environment does not often arise. I Following the exercise, the feedback from all passengers, firefighters and numerous observers from the research team was gathered. The scientific preparation of the first impressions was started during the night. All findings will be evaluated in detail over the next few weeks and incorporated into further project work.

"U-THREAT - Resilience of underground public transport systems to ensure availability" is an international research project coordinated by STUVA. Since August 2017, U-THREAT has been funded by the Federal Ministry of Education and Research (BMBF) and the French Agence National de la Recherche. The research programme runs until 2020.

Further Information about the project U-Threat you can find here: www.u-threat.com 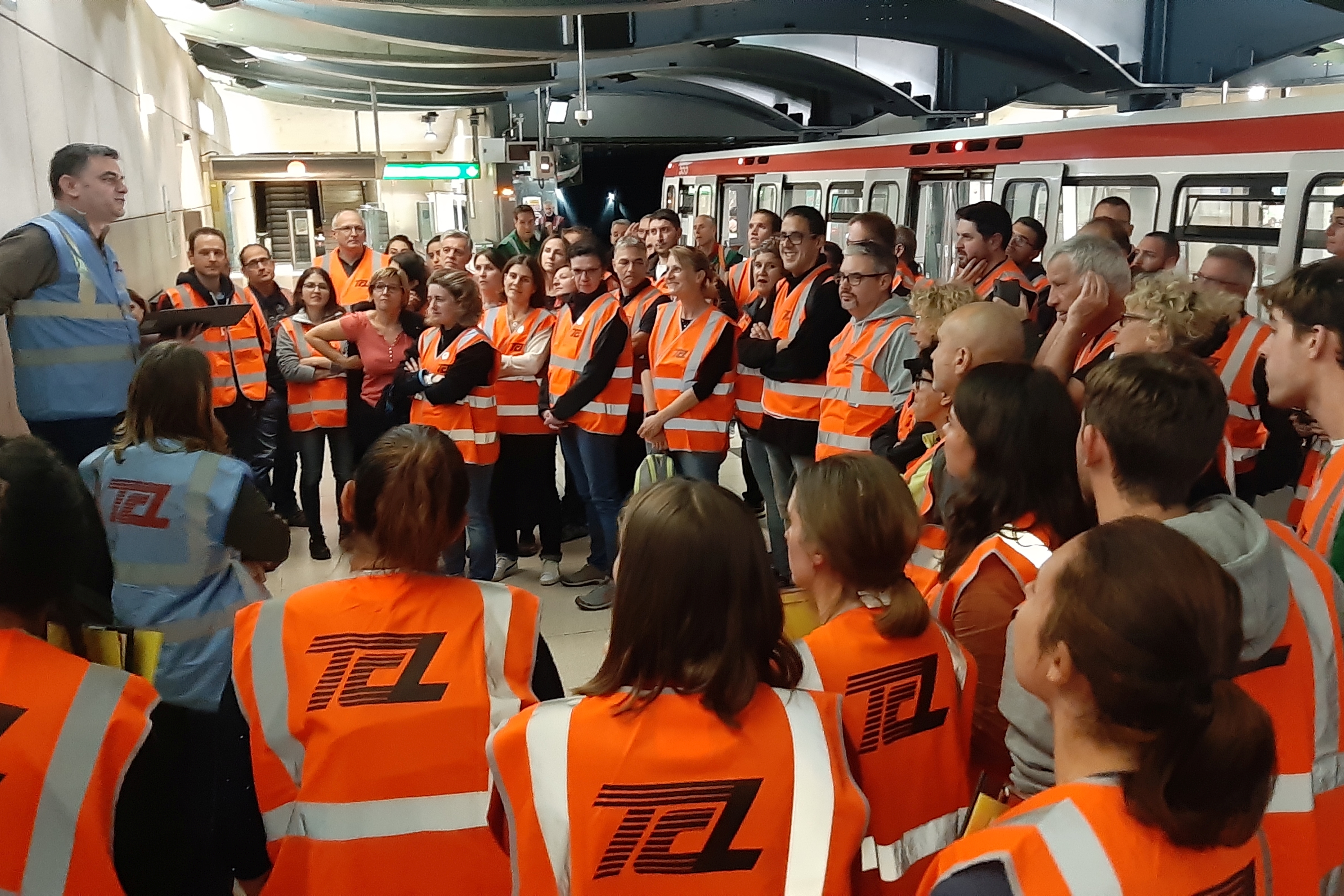 Final instructions to the 80 passengers involved 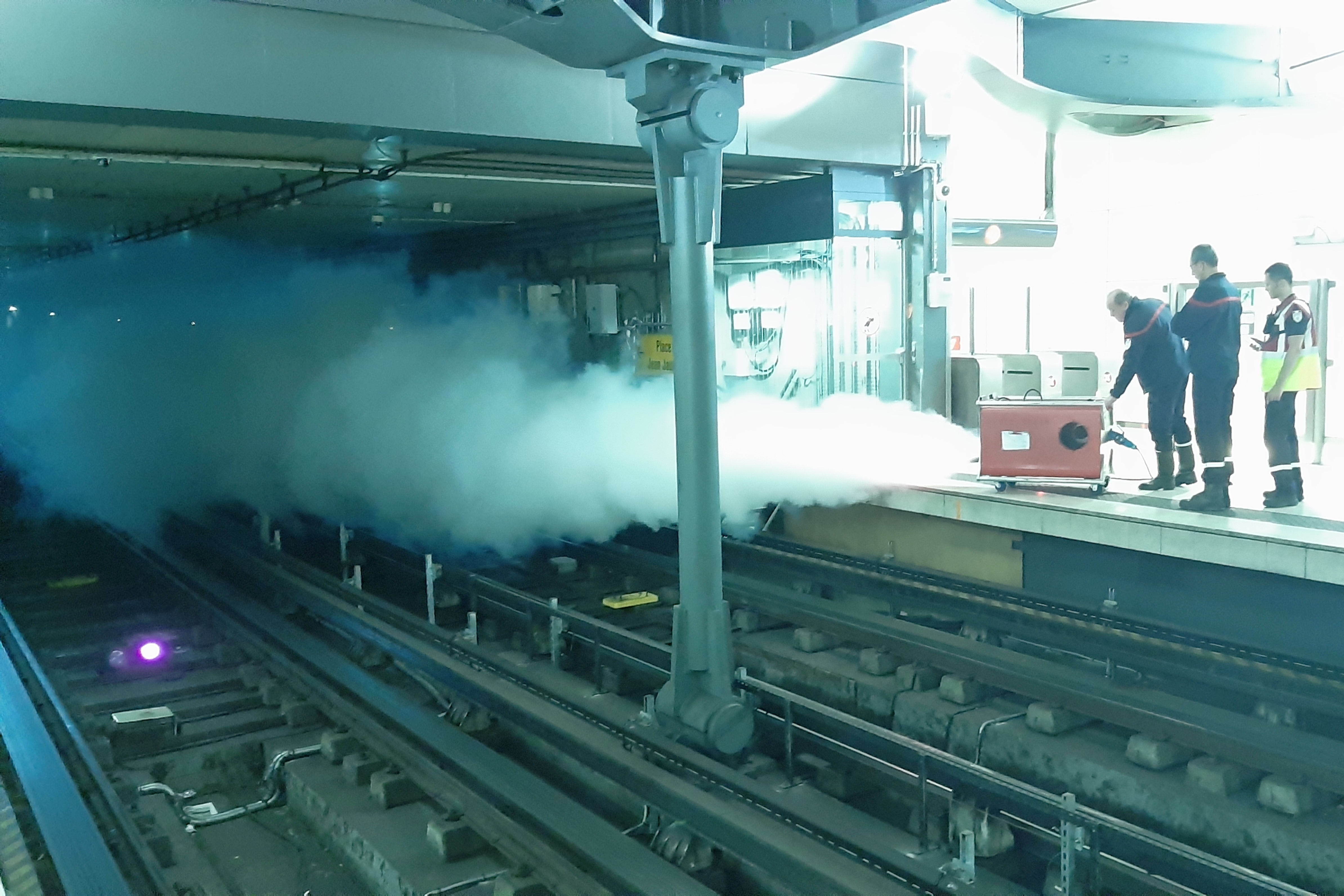 Artificial smoking of the underground tunnel 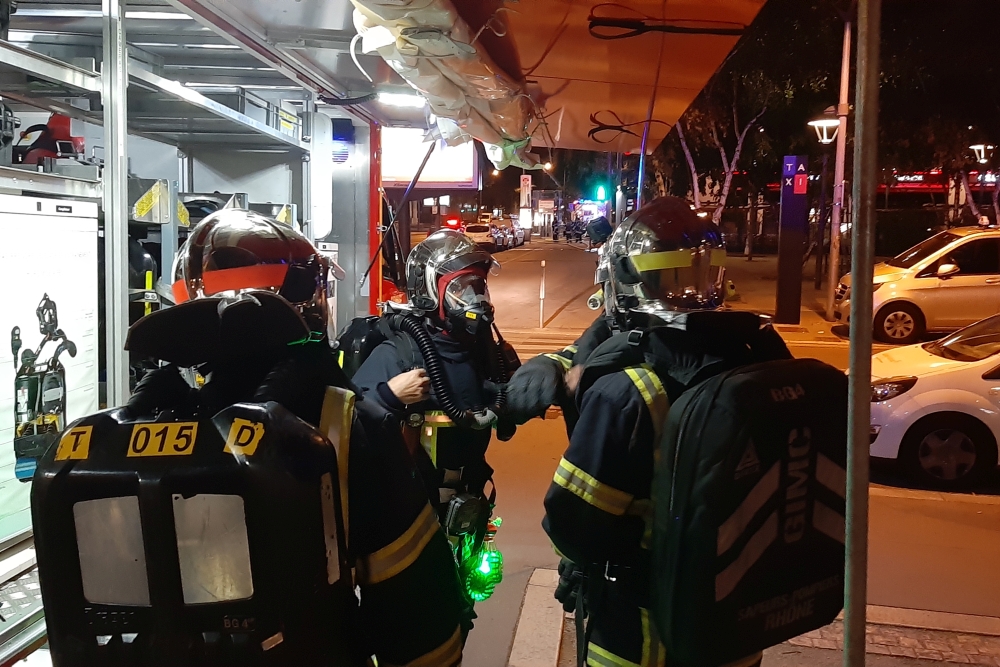 Preparation of the Lyon fire brigade for the rescue mission 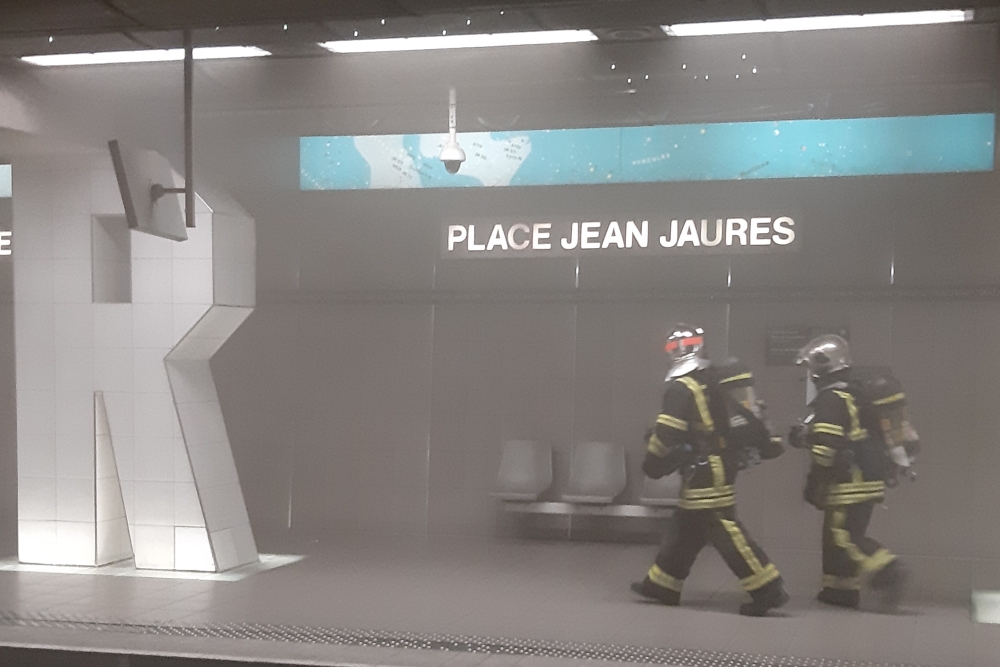 Significant fumigation of the adjacent stations 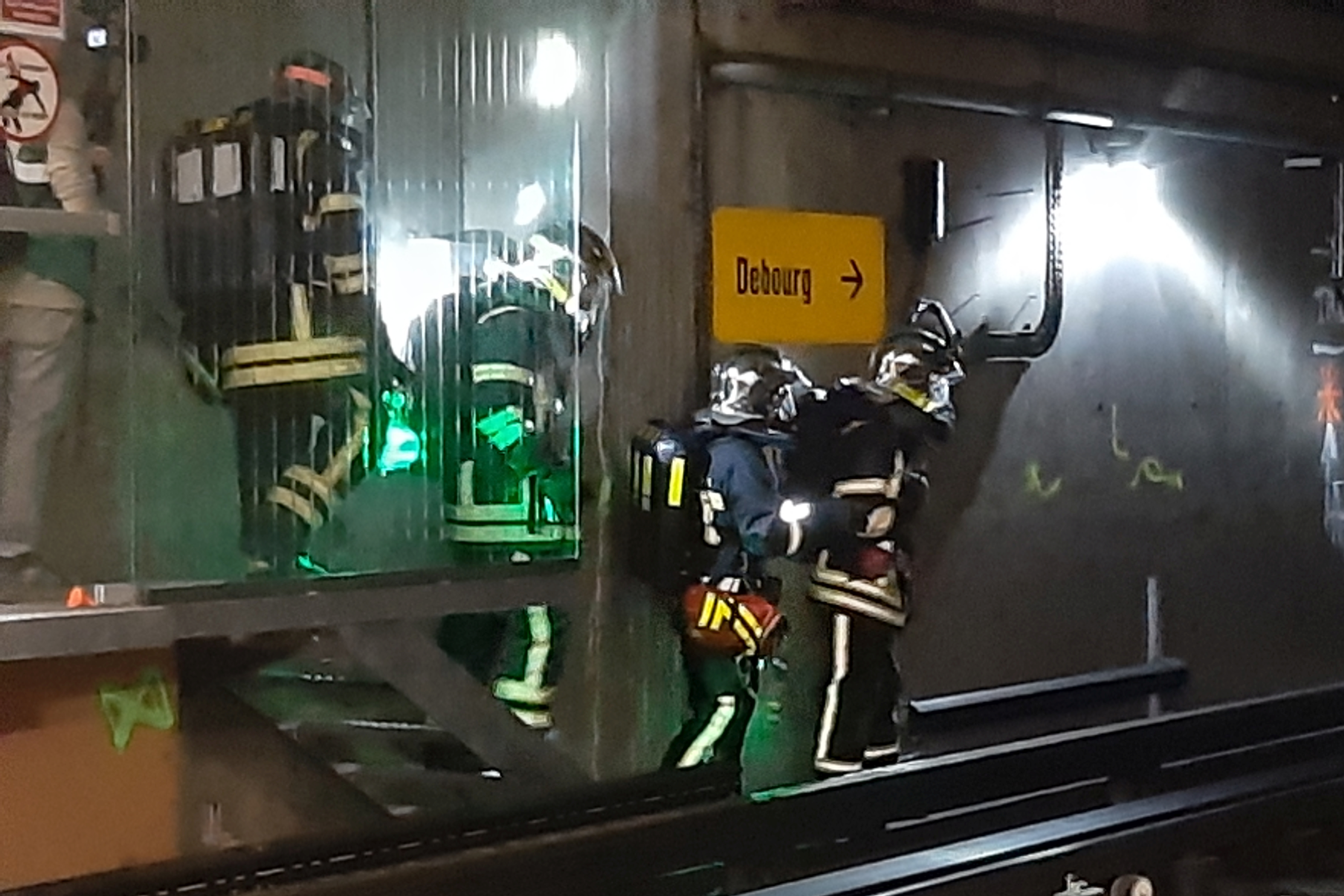 Realistic situation for the fire brigade: near darkness and confined spaces 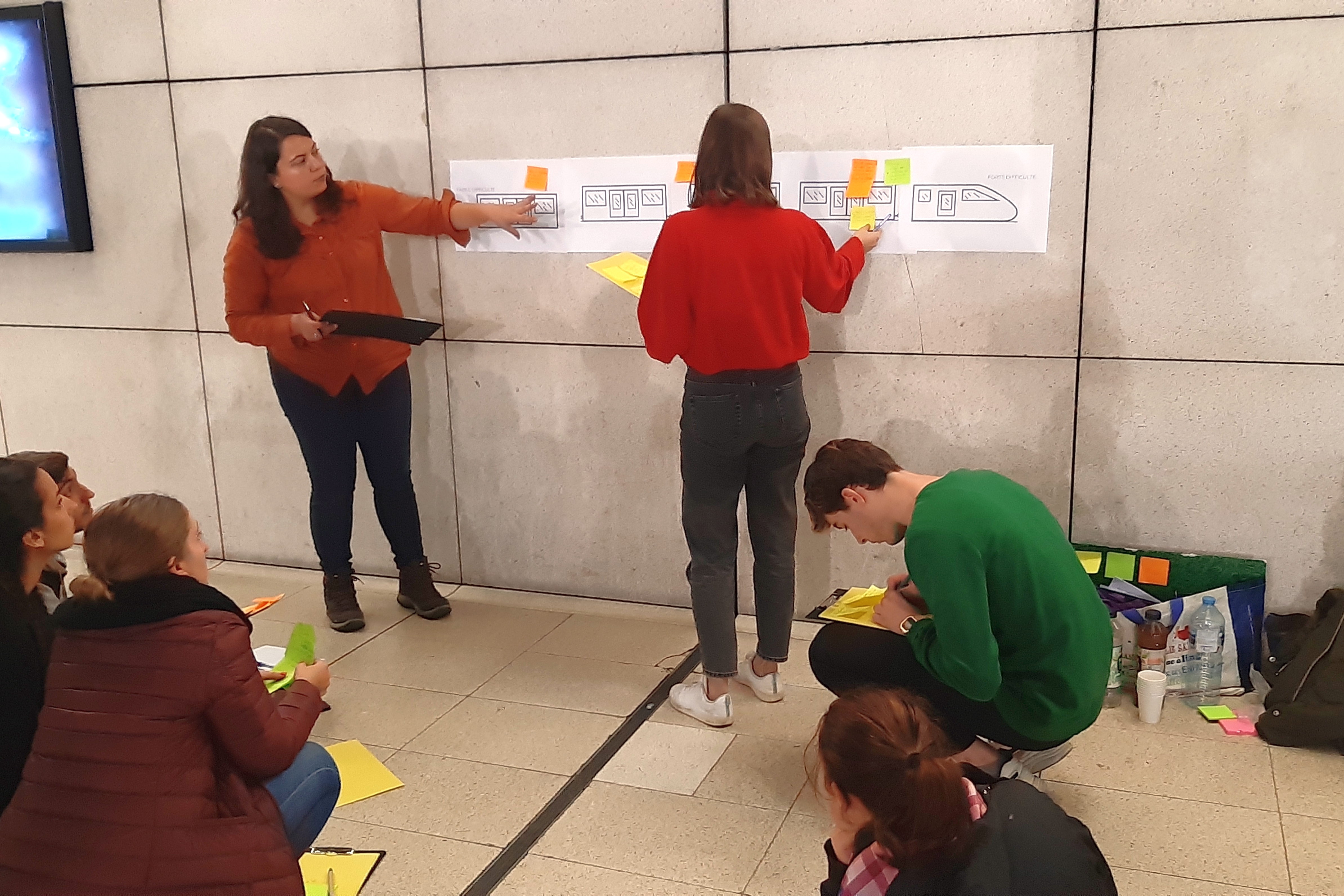