In mid-March 2019, the members of the Forum for Young Engineering Professionals (STUVA-YEP) met for the third time. The topic of the event was "New infrastructure under the challenges of existing infrastructure". The hosts of this event, Schüßler-Plan GmbH and Wayss & Freytag Ingenieurbau AG, invited around 50 young engineers to the "Gateway Gardens" construction site at Frankfurt Airport. In addition to presentations from the fields of research, planning and construction, a construction site excursion to the new S-Bahn line and the new "Gateway Gardens" station was offered in keeping with the subject. In Frankfurt, the new "Gateway Gardens" district is being developed adjacent to the airport. By 2021, a new commercial district with a projected gross floor area of around 700,000 m² will be built on the 35 ha site of a former US military settlement.

The program of the meeting began on Sunday evening with a get-together at Depot 1899 in downtown Frankfurt. Existing contacts were cultivated and new ones established during a joint dinner. On Monday morning, Dipl.-Ing. Dipl.-Wirtsch.-Ing. Thomas Fiedler (Division Manager Mitte der Wayss & Freytag Ingenieurbau AG) and Michael Richter (Department Manager Tunnel Construction and BIM Coordination at Schüßler-Plan) welcomed the group of STUVA-YEP on behalf of the host companies before the lecture programme started with a total of four lectures from practice and research. Max Drost, M.Sc., Wayss & Freytag Ingenieurbau AG gave the first lecture on the technical features of the new tunnel to connect the new Gateway Gardens district with the existing infrastructure. The undercrossing of the Frankfurter Kreuz was a particular challenge. In the second lecture Dipl.-Ing. Peter Lis, IMM Maidl & Maidl Beratende Ingenieure GmbH & Co. KG described the challenges that arose during the extension and reconstruction of the Dortmund HBF light rail system while maintaining operations. Anna-Lena Hammer, Ruhr-University Bochum, presented the research project KOINOR, in which concepts and procedures for fire protection retrofitting of underground traffic structures are developed. Finally, Dipl.-Ing. Philipp Jestaedt, Schüßler-Plan GmbH, gave a fourth lecture on the static investigations of the tunnel-in-tunnel method against the background of the cavity problem in the mountains using the example of the Cramberg Tunnel. After a refreshing lunch break, the participants visited the tunnel construction section underneath the new district, which was almost completed in its shell, including the new "Gateway Gardens" stop. The double-track tunnel was constructed over its entire length using the open construction method and cover construction. In the area of the station, the cross-section will be widened to a width of more than 20 m, as the platform is located in the middle between the tracks. A special feature is the arched ceiling with several large openings, which are intended as a smoke outlet in case of fire (see picture).
After the construction site excursion, the successful third STUVA-YEP meeting ended. We are very pleased about the great interest and the active participation in the previous events and look forward to further support for future STUVA-YEP meetings! The Forum for Young Engineering Professionals would like to thank Schüßler-Plan GmbH, Wayss & Freytag Ingenieurbau AG and DB Netz AG for organizing and hosting the third meeting and for their hospitality.

The STUVA-Forum for Young Engineering Professionals (STUVA-YEP) was founded in December 2017. The aim of the forum is to network young engineers, to promote the exchange of knowledge between research and practice and to create an international representation of young engineers employed in Germany. Further information on the forum can be found on Homepage of the forum. 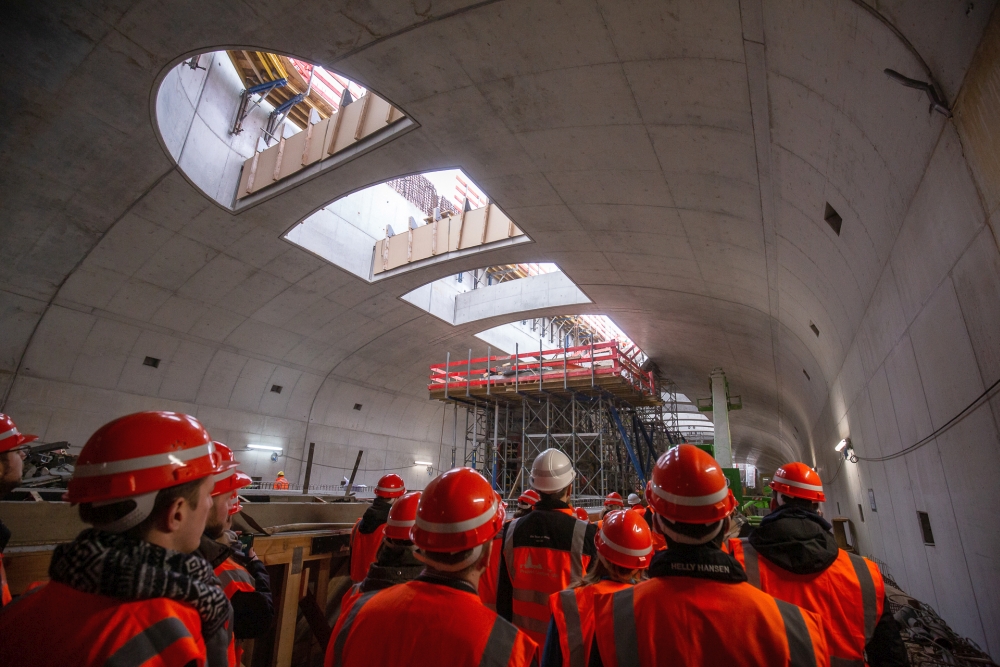 The vaulted ceiling with several large smoke vents at the "Gateway Gardens" stop, which was the subject of the lecture, could be inspected on site.
Contact person
Julia Krieger, M. Sc.
STUVA e. V.
+49 221 59795-28
E-Mail