After numerous digital workshops with lectures and subsequent discussion rounds, it was finally back to the construction site for us, the members of the Forum for Young Engineering Professionals (STUVA-YEPs)! Under the framework topic "Challenges of inner-city tunnel construction", the YEPs were invited to a series of lectures followed by a construction site excursion in Munich.

The expansion of underground rail and road infrastructure is taking place in various areas in the Munich region. The best-known project is the 2nd Munich S-Bahn main line, which is the central element of the expansion of rail-bound public transport in the Munich region and poses great challenges for clients, planners and contractors due to the geology, the depths and the inner-city location. An excursion to this special project was therefore particularly exciting for us.

On the evening of 10 July, we met in a group of about 30 YEPs at the Rumpler restaurant in the centre of Munich to ring in the two days of the event with a cosy dinner and accompanying cold drinks. It is particularly noteworthy that we were able to welcome not only YEPs from the immediate vicinity, but from the entire area of the republic up to the two coasts.

After a very nice and successful start, the actual programme began the next morning at the ARGE Tunnel Hauptbahnhof on the BE-West in Munich. Following a brief welcome by Marc Steinfeld as representative of the client, DB Netz AG, and an introduction to the day's programme by our two Steering Committee chairs Anna Zehlicke and Christian Rhein, the series of presentations began.

Dominik Spitzenberger from the Weilheim State Construction Office introduced us to his tasks as part of the Starnberg Tunnel construction team. The focus of the lecture was on communication between the builder and the residents. This concerns not only the way of communication, but also the influence of early communication on public opinion about the project. This has to be taken into account especially for construction processes with serious consequences for the residents.

The subsequent two presentations focused on the same project: the extension of the U5 in Lot 1 from Laim to Pasing (Munich city centre). While Verena Inhofer from EDR GmbH gave us an understanding of the planner's perspective, Benedikt Ruppert from Alfred Kunz Untertagebau presented the project from the perspective of a construction manager. Finally, to conclude the series of lectures, Marc Steinfeld (member of the STUVA YEP Steering Committee) from DB Netz AG presented the destination of our excursion, the 2nd Munich S-Bahn main line. We were given a comprehensive insight into the previous planning and preparation phases of this major project and learned about a variety of challenges of this inner-city construction project as well as the creative approaches to solving them. We would like to take this opportunity to thank all the speakers once again for their fascinating insights. After the series of lectures, a communal snack in the lecture room provided an opportunity to exchange ideas and to pose further questions to the speakers.

During the subsequent excursion, we were able to see for ourselves the challenges in construction work that had already been presented. The large group was divided for the guided tour of the BE-West construction sites near the Donnersberger Bridge and the main railway station. Under the guidance of Carolin Scheuerer from ARGE Tunnel Hauptbahnhof, we were able to visit the construction site at the main station. There we were given an insight into the preparations for sinking an approx. 40 m deep access shaft and the operations building. The shaft is to be excavated under a cover in order to be able to work underground and above ground at the same time. The cover itself consists of several storeys, some of which will be part of the operations building. On the construction site at Donnersberger Brücke, the launch pit for the tunnel boring machines is being excavated. Work on the sealing block is underway in front of the stop wall. In the immediate vicinity of the starting pit, the excavation area for the tunnel drives is being prepared. Here, Marc Steinfeld presented the progress of the current work to us.

On behalf of the Forum for Young Engineering Professionals, we would like to thank DB Netz AG and ARGE Tunnel Hauptbahnhof for hosting the meeting and for their hospitality, as well as Vössing Ingenieurgesellschaft mbH and Alfred Kunz Untertagebau (now August Reiners Bauunternehmung) for their support with catering. We would also like to thank all the companies and bosses who allowed their young engineers to travel to Munich for our STUVA-YEP workshop. 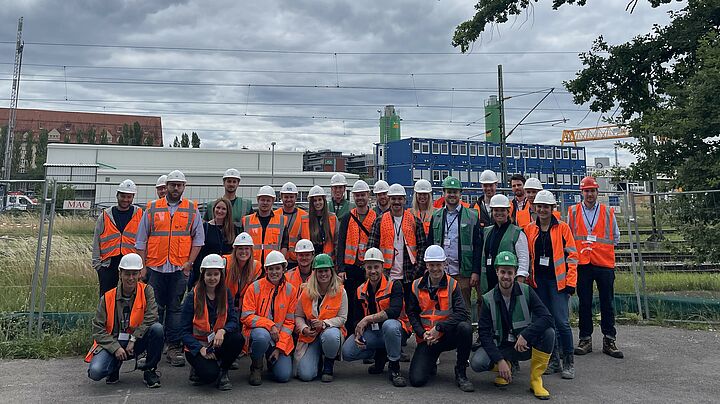 Finally back on the construction site: The STUVA YEPs as guests on the 2nd S-Bahn main line in Munich 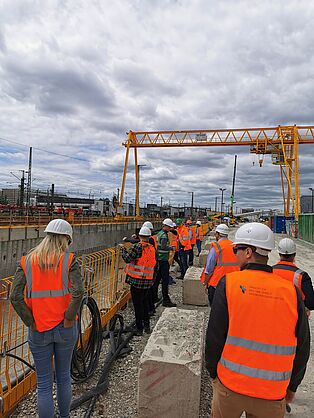