On the closing day of the 9th International Symposium on Tunnel Safety and Security (ISTSS) on 07 May 2021, Prof. Dr.-Ing. Alfred Haack received the ISTSS's prestigious Achievement Award for his lifelong services to fire safety and for his many years of cooperation with the Swedish Research Institute RI.SE, which organises the symposium.

In justifying the award to the former STUVA Managing Director Haack, keynote speaker Anders Lönnermark (Director of the Fire Protection Department within RI.SE) highlighted the long research partnership between STUVA and ISTSS. In addition to his active research work and fire protection consulting in countless major projects, Prof. Dr.-Ing. Alfred Haack had repeatedly provided significant impetus for the symposium since the founding of the ISTSS in 2003 and had supported the work of the organisation over the decades.  Since the ISTSS 2020 was initially postponed to 2021 for corona reasons and finally had to be held as an online event, Mr Haack was supposedly only able to follow his own award ceremony on the screen in the STUVA building in Cologne. His surprise was all the greater when the online award ceremony" became a kind of "hybrid award ceremony" and the current Managing Director of STUVA, Prof. Dr.-Ing. Roland Leucker, suddenly appeared next to him during the live broadcast with the trophy that had been secretly sent to Cologne weeks before and presented it to him.

In his acceptance speech, the newly minted award winner recalled the numerous joint research projects on fire protection, such as the DARTS, FIT and UPTUN projects, which were launched in response to the devastating fires in the Mont Blanc, Tauern and Gotthard tunnels between 1999 and 2001. "These projects have contributed so much to today's safety in European fire protection and have been instrumental in shaping recent legislation", Haack said. He was really pleased about the award, said Prof. Haack, but was a little irritated that he was receiving the prize for his life's work. "I naturally receive the ISTSS 2020 Life Achievement Award as a great personal honour and recognition..." said the now 80-year-old extremely spry award winner with a twinkle in his eye, then continued: "...but of course also as an incentive for the years that still lie ahead of me". Indeed, Prof. Dr.-Ing. Alfred Haack is the antithesis of a pensioner who has finished with his professional life. He is still at STUVA almost every day, where he devotes himself as a freelancer primarily to his second great life's work, the sealing of complex tunnels and high-rise buildings. His advice and profound knowledge are still highly sought after and appreciated in numerous large-scale construction projects.

The entire STUVA team wholeheartedly congratulates its former managing director on receiving the award and wishes him all the best for his future career... 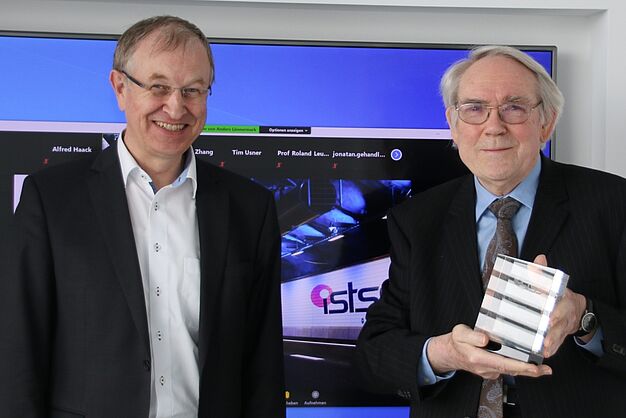 The "Hybrid Award Ceremony": On the left, the current Managing Director of STUVA Prof. Dr.-Ing. Roland Leucker and on the right his predecessor and recent ISTSS award winner Prof. Dr.-Ing. Alfred Haack.
Links