Despite Corona: STUVA Conference 2021 a complete success with 2G plus

With well over 1,000 registered participants, numerous exhibitors and hundreds of trade visitors, the STUVA Conference 2021 at Messe Karlsruhe did not set a new attendance record, but in view of the pandemic situation the number of participants was simply overwhelming. Thanks to the precautionary measures laid down by STUVA, which went far beyond state regulations, an exceptional conference in all aspects was successfully held from 24 to 26 November 2021.

The last days before the long-awaited event were what is commonly called a real nail-biter for all STUVA staff. Rapidly rising Covid19 cases throughout Europe led to isolated cancellations by unsettled conference participants and exhibitors and led to fears of the worst. The most anxious questions before the start were: Will the conference be cancelled because of the pandemic situation? Will anyone come at all?

When the doors to the fair opened at 8 a.m. on Wednesday and the stream of participants poured into the halls, all these worries were blown away. From the very beginning, there was that very special feeling at STUVA that has been so characteristic of this biennial family reunion of the tunnel industry for the past 60 years. The many beaming faces behind the mouth-nose masks clearly showed how much everyone was looking forward to these three days after almost two years of practically no attendance events. Finally, real face-to-face contacts with real people again, with old and new colleagues from their own industry! And the anticipation was not disappointed. Thanks to the mandatory 2G-plus regulation (only vaccinated and recovered people and everyone with a daily test and mask requirement), everyone present could feel safe in the spacious premises of Messe Karlsruhe. Thus, nothing stood in the way of an all-round successful event.

Even during the opening speech by Prof. Dr.-Ing. Martin Ziegler, Chairman of STUVA e. V., the long rows of chairs in the large hall of the dm Arena were filled to capacity. After his opening speech, a word of welcome from Dr. Frank Mentrup (Mayor of the City of Karlsruhe) and another word of welcome from Dr. Nicole Hoffmeister-Kraut (Minister of Economic Affairs, Labour and Tourism of the State of Baden-Württemberg), the first specialist presentations continued seamlessly.

The first speaker was the current Managing Director of STUVA, Prof. Dr.-Ing. Roland Leucker, who spoke to all the conference participants about one of the most burning issues of the future in the construction industry, climate protection in transport infrastructure construction. Prof. Leucker not only impressively demonstrated the need to reduce the industry's considerable CO2 emissions, but also immediately gave pointers on possible ways to achieve this important goal.

After that, the plenum split up. The tunnel builders continued in the same room, while the tunnel operation and planning lectures ran in parallel in a somewhat smaller lecture room. Both series of lectures were excellently attended and - as befits an international conference - translated throughout by simultaneous translators into English or, in the case of English-speaking lecturers, into German.

The large area of the STUVA-Expo, where the numerous exhibitors presented their products and services, was also in a great mood right from the start. Although the number of visitors was not quite as large as at the conferences before the pandemic, this did not dampen the mood. "We had great contacts at our stand on both Expo days and enough time for a longer conversation. At any rate, our order books are now full," said a satisfied exhibitor summing up his conference experience on the final day.

The already cheerful and relaxed mood was exactly the right prerequisite for the traditional festive evening on the first day of the event. After a champagne reception hosted by STUVA sponsor TPH Bausysteme GmbH, it was time to move on to the festively decorated hall for the evening event at around 8 pm. Despite the large number of participants, the delicious buffet and the ballroom were never overcrowded. Large spaces between the individual tables and plenty of room around them never gave rise to a feeling of crowding, so it was no wonder that the free beer at the (now traditional) "Keller"-Bar of the Keller-Grundbau company was still very busy even at 3 a.m.

The first two days flew by far too quickly and for those participants who were unable to take part in the construction site excursions on Friday, it was time to say goodbye to a STUVA Conference 2021 that was just as inspiring and lively as we rightly expect from this event every two years. On the other hand, it was a conference that was very special and hopefully unique because of the Corona pandemic and the necessary protective measures.

In any case, one thing is certain: without the discipline of all those involved, the event would certainly not have been possible in the form it took. STUVA would therefore like to express its heartfelt thanks to all speakers, participants, exhibitors, technicians, helpers, sponsors. Without their understanding for the protective measures and without the trust placed in the STUVA, such an event would not have been feasible during the pandemic. So heartfelt thanks to all friends of the STUVA! Stay healthy and join us in looking forward to seeing you again at the next STUVA meeting in Munich in 2023. 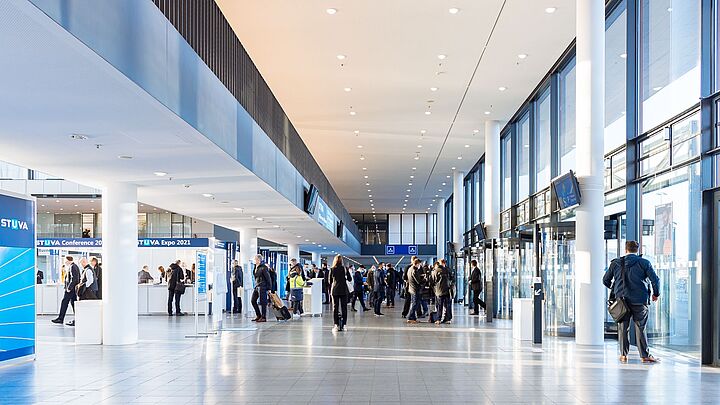 The gates opened punctually at 8 a.m. on wednesday and everyone came. Those who had made it to the foyer had already passed the strict security check outside: Admission only for vaccinated and recovered people with a daily updated test! 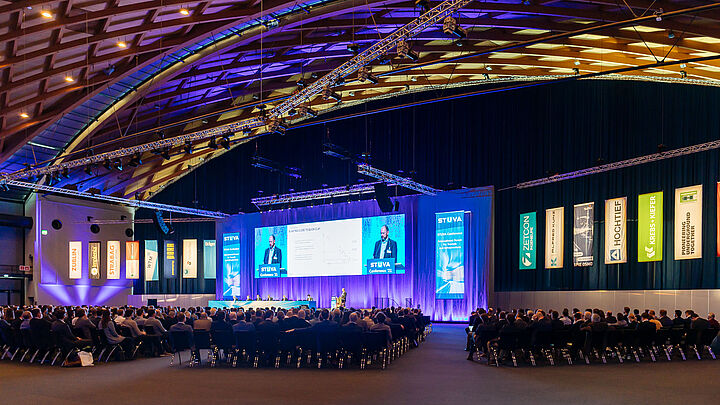 The large lecture hall offered plenty of space for the speakers' presentations, but also for the safety of the audience. 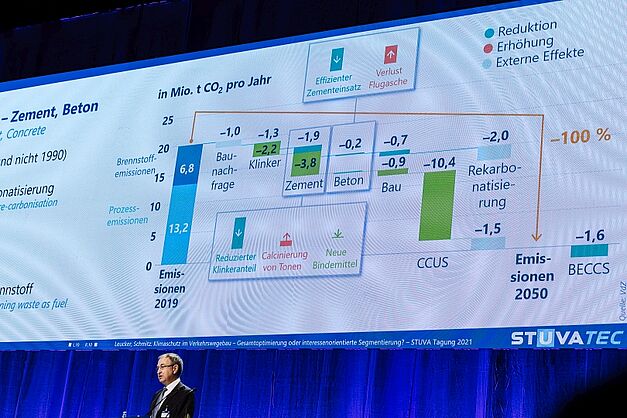 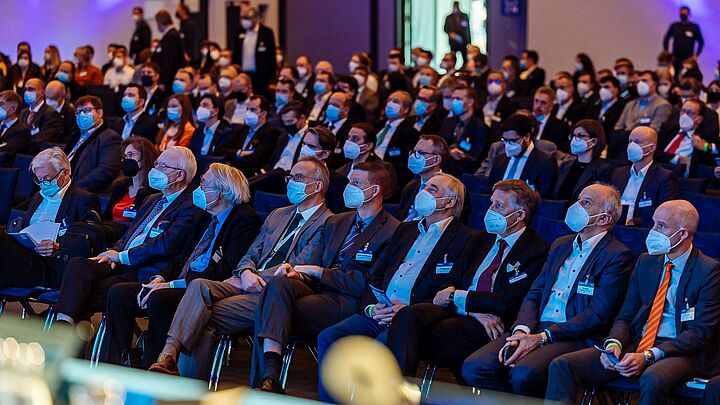 Exciting lectures and pictures like from earlier years - only the obligatory masks remind of the special situation. 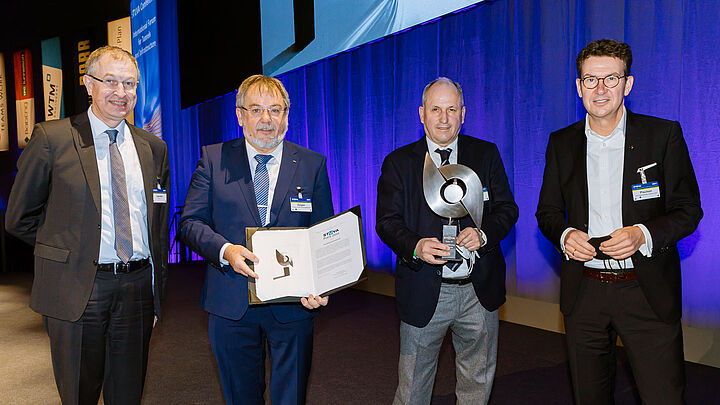 Awarded: The STUVA Prize 2021 was awarded to the Kombilösung Karlsruhe and the associated overall public transport concept for the city. The two managing directors of Karlsruher Schieneninfrastruktur-Gesellschaft, Frank Nenninger and Alexander Pischon, accepted the award from Prof. Dr.-Ing. Martin Ziegler. 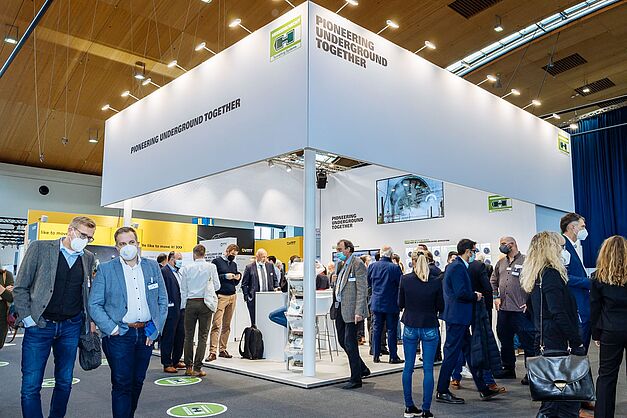 The STUVA expo was also well attended and invited to informal technical discussions. Only the usual squeeze was missing... 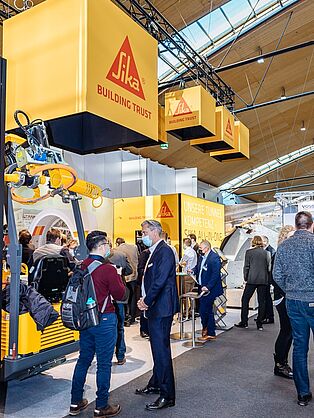 The response from exhibitors so far has been overwhelming. Great contacts at the booth and full order books 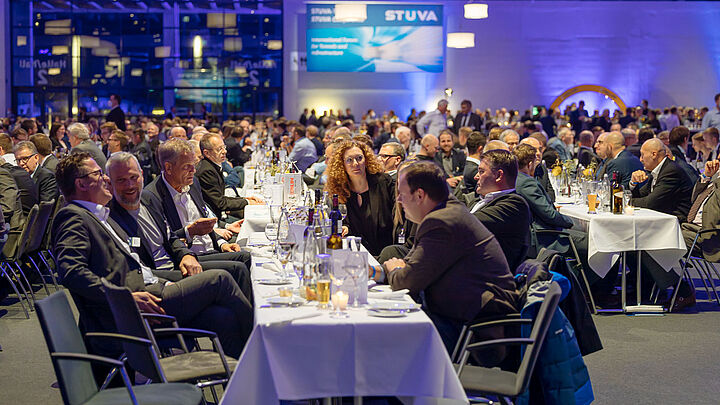 The traditional festive evening of the conference: Plenty of space between the long rows of tables ensured maximum safety. The good mood came all by itself. 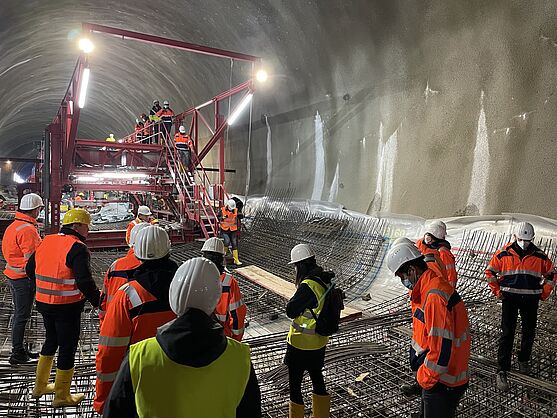 Tunnel construction up close: Exciting STUVA excursions on the third day, like here during the exclusive construction site tour in the Arlinger Tunnel